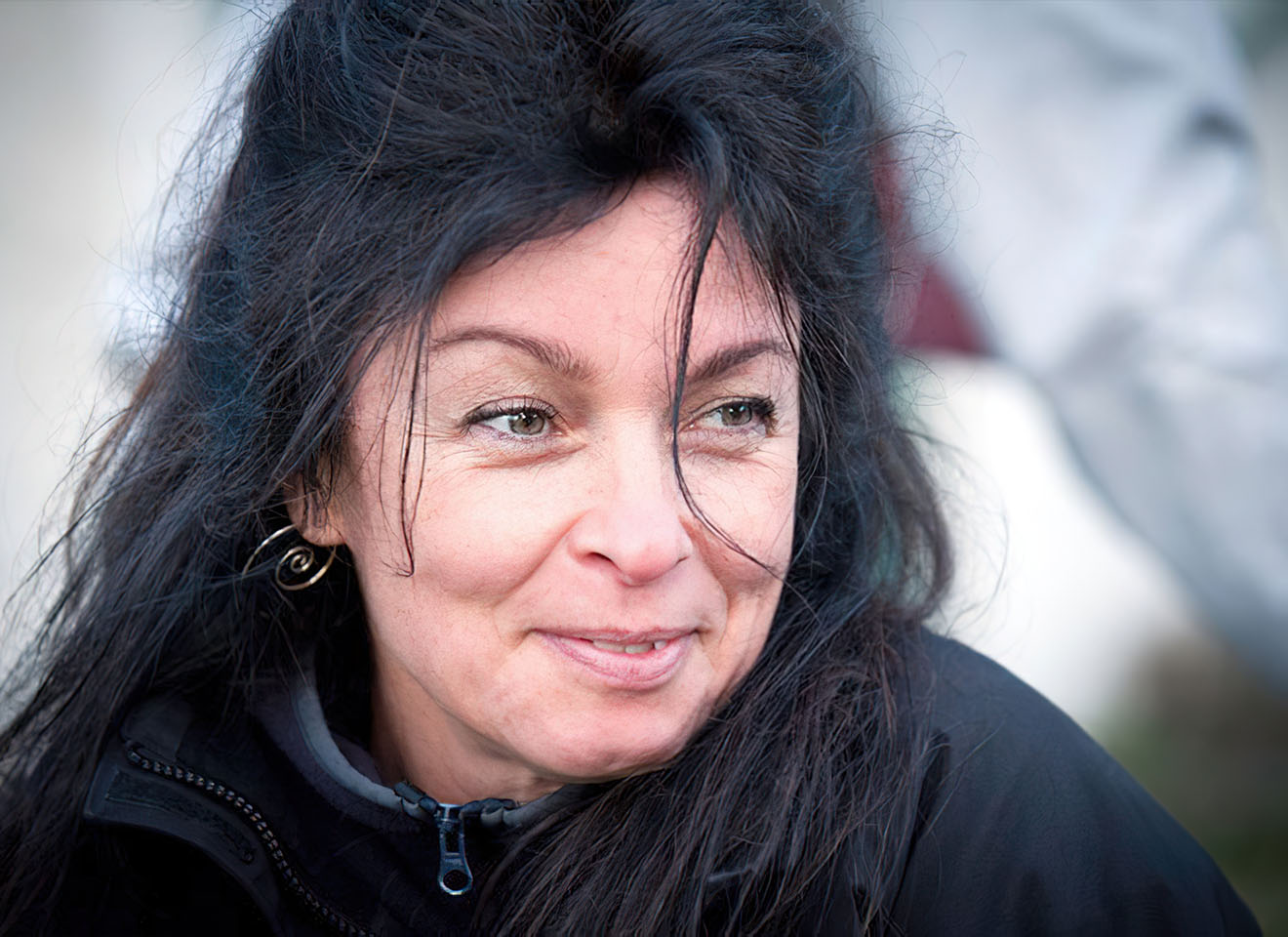 One day when Joanna Holmgren is gathering currants at her allotment garden, her back starts to hurt from all the bending. The back pain spurs Johanna on to find a solution to the problem. That was the start of the innovation known as the Berry Belt. These days, it is not only used by berry pickers but has several other areas of use.

Joanna Holmgren is born in Uppsala and raised in Norrköping, but at the age of 17 she moves to Stockholm to start her dance education. Besides having been a professional dancer, Johanna has also worked as a photographer, an artist, a singer, and a garden designer.

Her professions have changed over time, but her creativity and imaginativeness has always been the same. 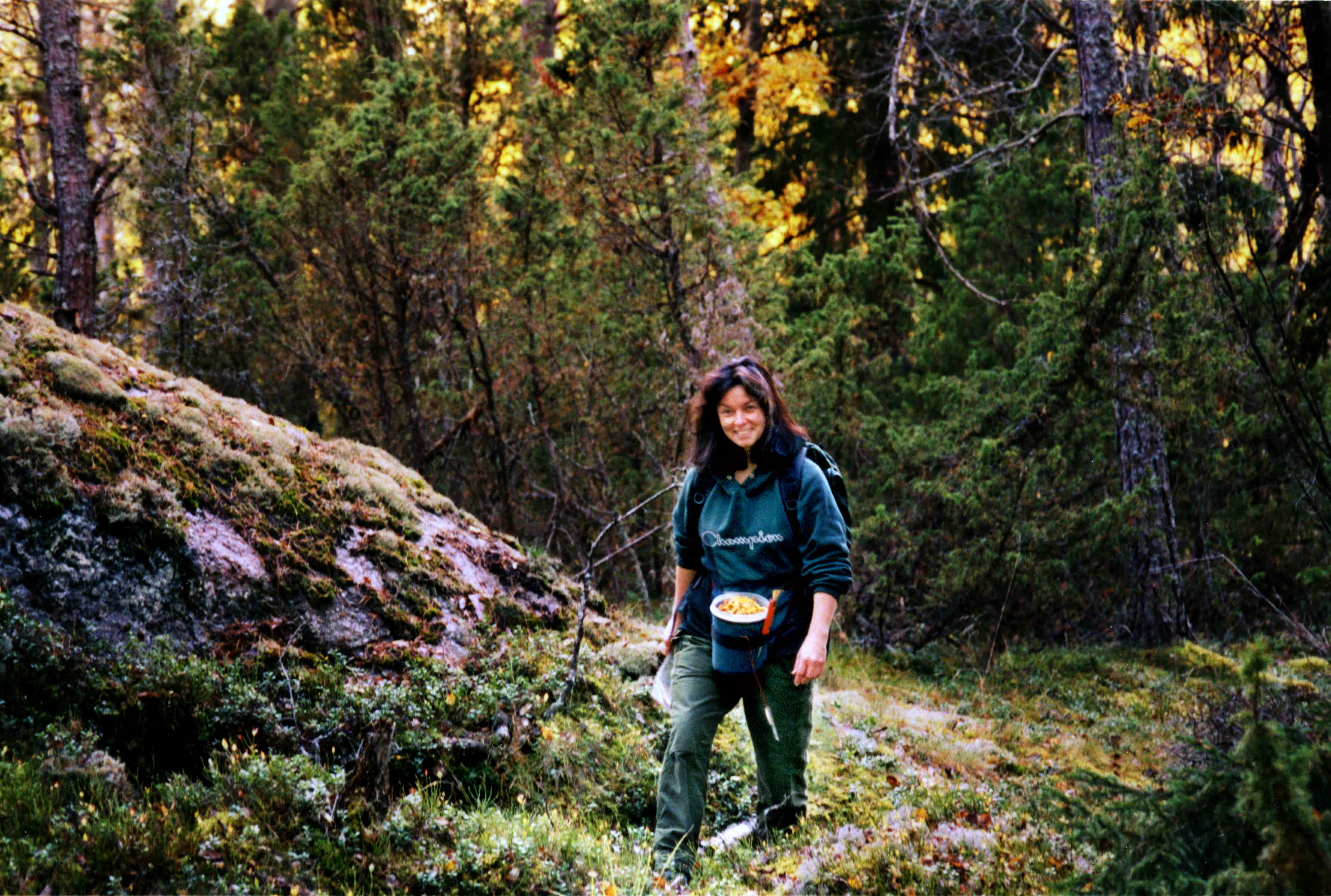 Currant berry picking and inspiration from a book

Joanna shares the story of how the idea for the Berry Belt came to be. It starts with her reading “Gör din grej” (Swedish for “Do your thing”) by Fredrik Langborg and Christer Westlund. The book explains how the brain works and claims that if you pose a question in the right way, the brain will find a solution after a while. The book gives Joanna ideas, and she starts to think about a product that does not exist but would solve a common everyday problem.

A few weeks later, Joanna is harvesting currant at her allotment garden. The berry picking is hurting her back a lot as Joanna is suffering from a previous back injury. There and then, she figured out the solution to her problem, the innovation known as the Berry Belt. 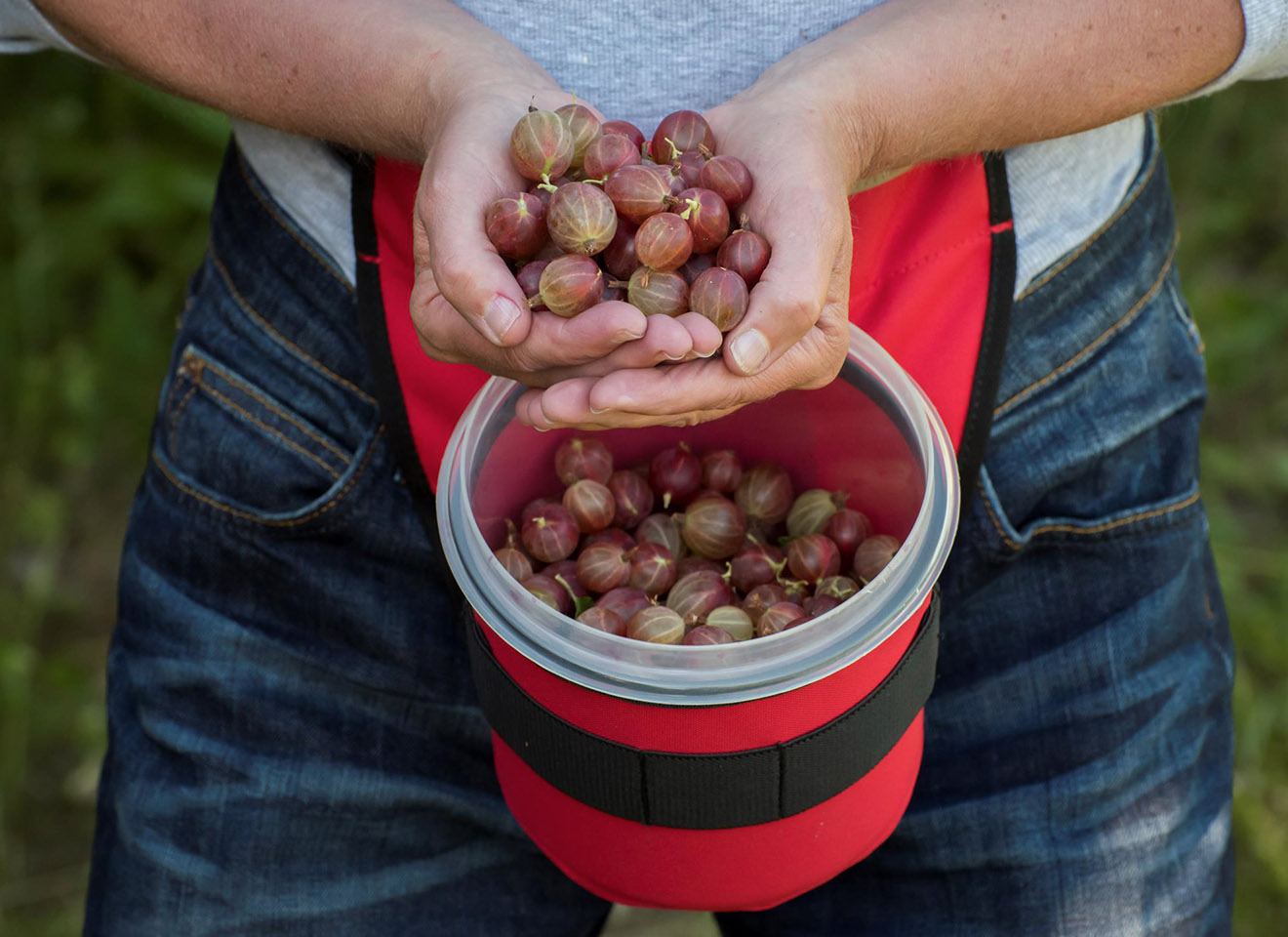 –Picking berries and mushroom gives a monotone type of movement and that did not sit well with my bad back. That is why I saw a demand for the Berry Belt myself.

”I do not like to pick the berries, I prefer eating them”

–I do not really like to pick the berries as much as I enjoy eating them. My favourites are American blueberries, raspberries, blackberries, cherries, and sea-buckthorn.

Joanna has a genuine interest in gardening that she received as a young child from her aunt Karin and her husband who were both gardeners. Joanna had the opportunity to help in the garden and would often get to bring plants home with her.

–I held on to my aunt’s skirt and helped with the planting. We are a real nature family that has always gone for walks in the forest and picked berries and mushroom. Therefore, it became natural for me too. 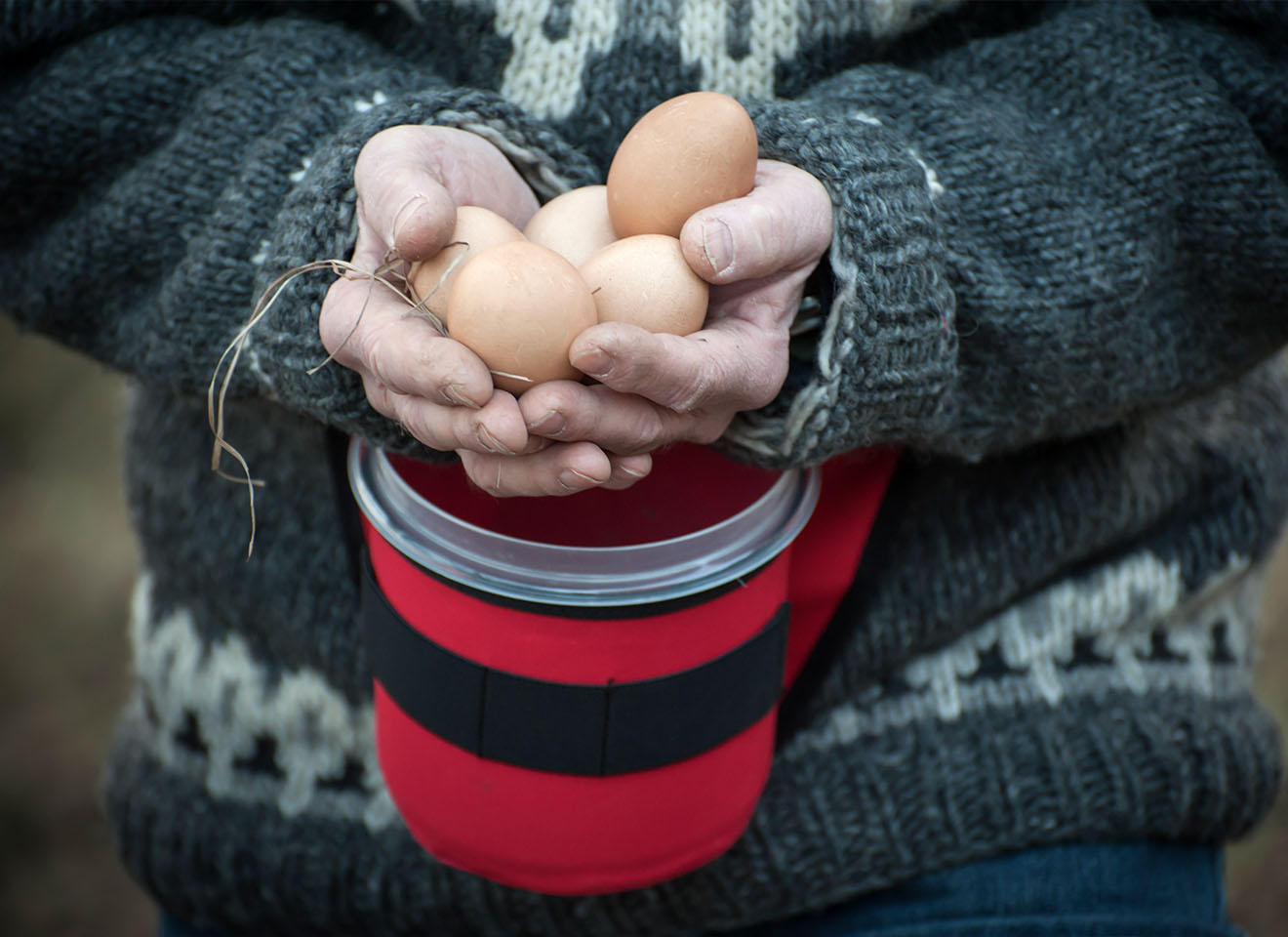 Joanna starts to study at Ideum

Joanna gets prompted to show her innovations for Margareta Andersson-Hilstad, who were a member of the Swedish inventors’ association at the time.

Margareta suggested that Joanna should apply for Ideum, Swedens school for innovators, which Joanna did.

–The hard part was not to come up with the idea. The Berry Belt is one of many innovations I have thought about. It is a bigger challenge to get the whole chain to work. For instance, finding a manufacturer with good conditions for everyone involved.

Nowadays the bucket for the Berry Belt is made in Thailand, and the bag is sewn in China. It was together with Joanna’s agent, Mats Andersson, that it was decided it would be these countries, as he had several connections there already.

But it was not only Joanna and Mats that was a part of the working process for the berry belt. In the year of 2002, Joanna did a market research at the garden exhibition where she interviewed 110 visitors about the function, design, and material for the Berry Belt.

–The visitors got to see the first prototypes. Everything from neutral fabric of linen, flower patterns to camouflage. We also tested out buckets made of moisture-absorbing paperboard.

The Berry Belt that is sold today was the prototype that the visitors liked the most. The Berry Belt is sewn from durable, water-repellent fabric with elastic straps for knife, secateur, map, and compass. The waist belt is adjustable, and the bucket with a lid is micro-, freezer-, and dishwasher safe.

–My focus was quality, not a wear and tear product.

The Berry Belt has several areas of usage

– Most berry pickers can benefit from the Berry Belt because you get both hands free.

Joanna deems that her innovation has several areas of usage.

–When I had gone through my back surgery I used the Berry Belt as a holder for my mobile phone, remote controls. and other things, to get my hands free for my crutches that I had to walk with for months. 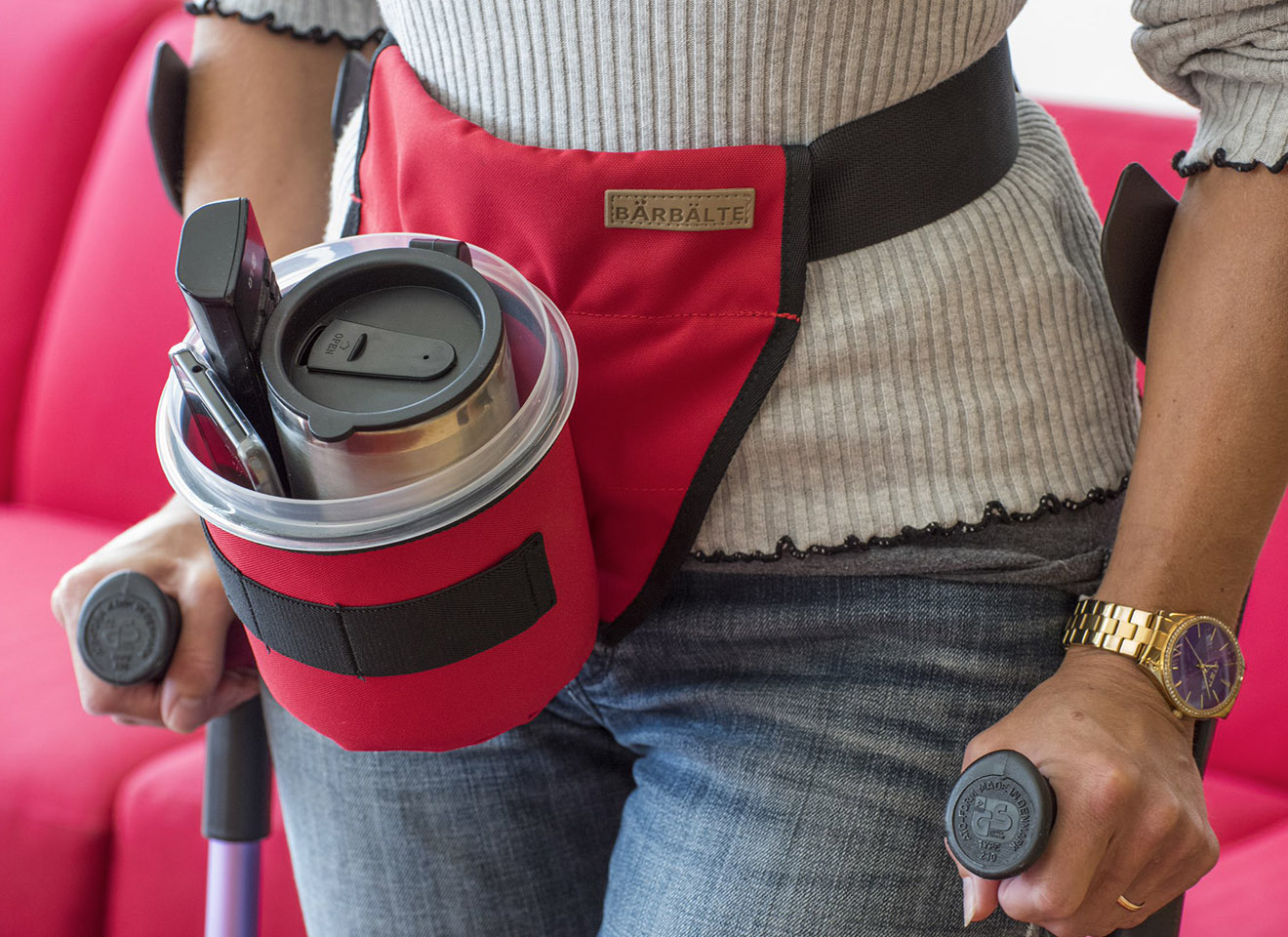 What Joanna drives at is that except berries and mushrooms, you can fill the Berry Belt with eggs and other things. She happily continues by sharing about companies in the construction industry, and how they use the Berry Belt for keeping screws.

–As a garden designer, I have not had the time to be the driving force behind the Berry Belt. The thing I am most happy about is the function and the quality.

Joanna is not in the mood for manufacturing more innovations as she thinks that it takes up too much time, and that things like the Berry Belt gets copied by bigger companies. Instead, she now wants to move to Skåne and channel her creativity in film and photography.

–I long for the stillness and the rhythm and song of the nature. In Kullaberg, Skåne, lies my grandfather’s childhood home, that is where my heart and soul lives.